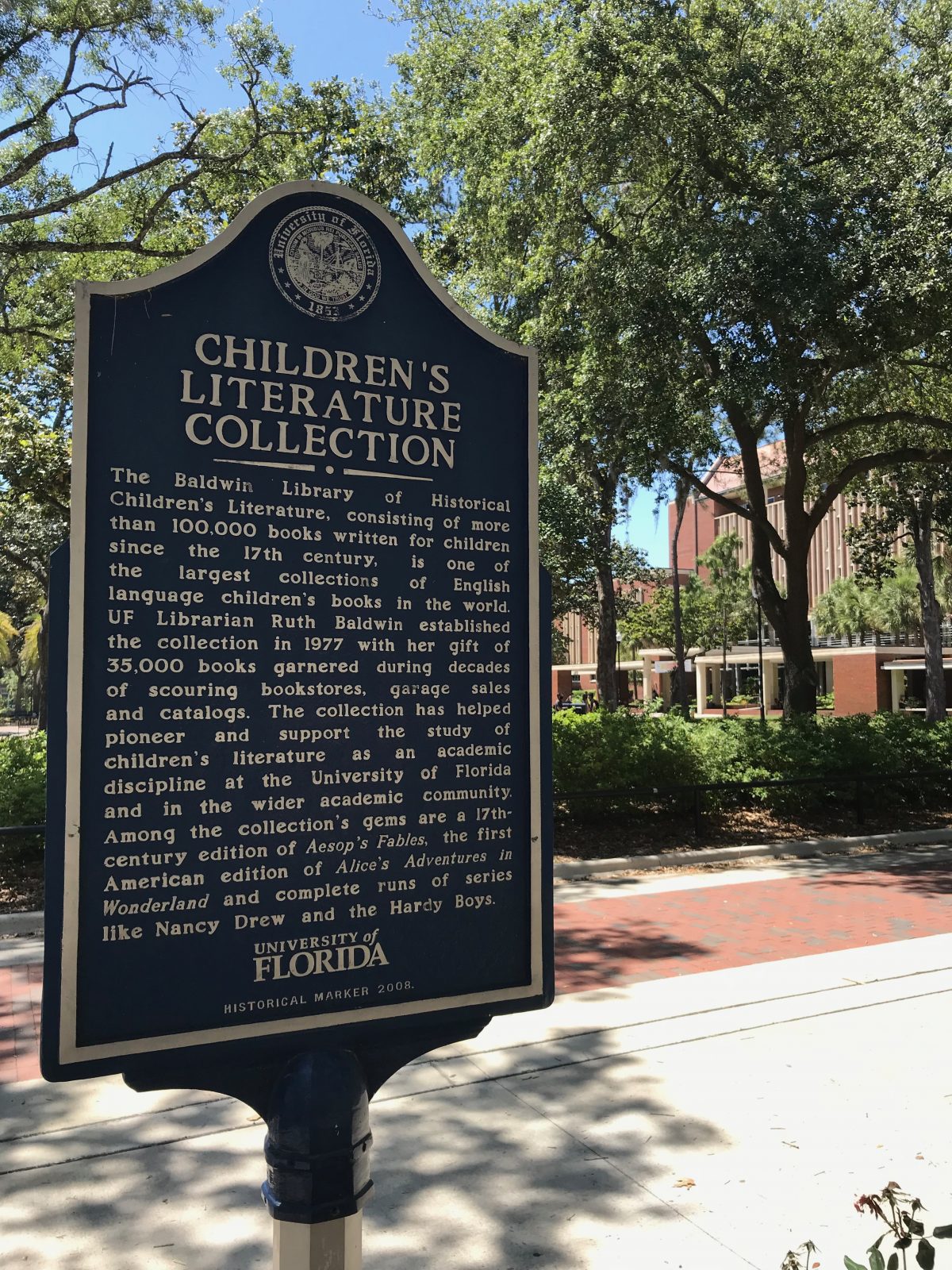 When Ruth Marie Baldwin first started collecting children’s books in 1954, she had no idea the journey would take her on buying trips all over the US and the UK, or that she would amass one of the largest collections of children’s literature in the world by 1977.

This article originally appeared in the Spring 2019 issue of SOURCE Magazine and was submitted by Suzan A. Alteri, Curator of the Baldwin Library of Historical Children’s Literature.

Ruth Baldwin’s collection, which numbered around 35,000 books in 1977, helped give the fledgling field of children’s literature legitimacy in the academy through its archive of primarily American and British children’s literature from the 18th-century through the early 20th-century. Since then, through the work of former curator Rita Smith, the collection grew to include 20th- and 21st-century books with a total number reaching around 120,000 titles. While the collection continues to expand in new and innovative ways, Ruth Baldwin’s original collecting philosophy remains the driving force for the Baldwin Library of Historical Children’s Literature at the University of Florida Libraries. Book collecting itself is an intensely personal experience, which is why so many institutional collections continue to bear traces of their original owners long after they have left.

In the more romantic writings about book collecting, collectors are usually seen as people who perform an inestimable service to literature. They are often likened to detectives excited by the thrill of chasing down rare books and rescuing them from oblivion. “The true book-hunter considers himself a discoverer rather than a purchaser, and it is the essence of his skill to find value in those things which in the eye of the ordinary possessor are really worthless,” John Herbert Slater wrote in 1891. Later, cultural theorist Walter Benjamin echoed similar sentiments on his own book collecting, recognizing “a relationship to objects which does not emphasize their functional, utilitarian value – that is, their usefulness – but studies and loves them as the scene, the stage of their fate.” Book collecting is focused on acquisition of the physical item rather than comprehension of contents, which is what separates a collector from what is traditionally called a book lover. Reading is not necessarily collectors’ entertainment; it’s the attainment that fuels their desire. “The period, the region, the craftsmanship, the former ownership – for a true collector the whole background of an item adds up to a magic encyclopedia whose quintessence is the fate of his object,” Benjamin mused.

While aspects of Baldwin’s collecting habits fit certain stereotypes of book collectors, in other ways she was the anti-thesis of the idealized collector with a no-nonsense approach to building her collection as reflected in her ability to bargain and resell duplicate texts to fund her book expeditions. Ironically, the origin of the Baldwin Library of Historical Children’s Literature’s is not with Baldwin herself, but with her mother, who purchased a few children’s “chapbooks,” small, inexpensive booklets, from McLeish’s bookshop in London as a birthday present to her in 1953. Baldwin was 35 years old and working on her Ph.D in Library Science at the University of Illinois. During the rest of 1953 and most of 1954, Elisabeth Baldwin sent her daughter between 300 and 400 children’s books. On October 10, 1953, Ruth wrote her mother that she was “perishing to see the books.” A few days after receiving her first package she wrote, “Here I am well started in a collection and loving it.”

Although Baldwin was born into a family of collectors, she herself did not collect books until after the arrival of those children’s books. Her father, Dr. Thomas W. Baldwin, was a Shakespearean scholar and book collector. Both of these pursuits caused Ruth to swear off book collecting. But she couldn’t resist the bundles of books her mother sent – less because she felt sentimental about her childhood and more because they represented an area of publishing that was full of small bibliographic problems. As her mother wrote to her towards the end of 1953, “I have another bunch in a corner on the floor – one a German of the same period and style as of the Kate Greenaway. How you’ll delight in the problem of which came first – and who copied who.” Baldwin wasn’t a collector in the narrowly defined bibliographic sense nor did she buy from more well-known, first-tier bookdealers in postwar Britain or the US. In her own words she had “never learned how to book shop in the large cities.” Instead, she would scour piles of books in rural antique stores, Goodwill, and other out of the way bookshops. This was a trick she had learned from her mother, who bought from markets around London or in the barrows outside the Daily Worker.

Her collecting philosophy also focused less on aesthetics, scholarship, or teaching, and more on the practicalities of purchasing large quantities of books on a female professor’s small salary. In the initial stages of her collecting, Baldwin didn’t have an overarching philosophy outside of being competitive and wanting to be the best in children’s book collecting. It was only as her library grew that she looked back and realized she was building the largest private collection of children’s literature in the US. Part of Baldwin’s refusal to think of her collection as a source for research was that she didn’t want to be linked with her father. While other collectors mediated – or intervened – in determining which children’s books were preserved for scholarship, Baldwin’s mediation came less from the idea of wanting to save only the best of children’s literature or materials to use in teaching and more from a desire to own everything published for children during the long 19th-century. As Carolyn Clugston Michaels summed up, the Baldwin library “realizes the whole world of the 19th-century childhood.”

When Gillian Avery, a children’s writer and historian of childhood, visited to dedicate the Baldwin Library in 1982, she was inspired to write about American children’s books. Personal correspondence between Baldwin and Avery reveal that the collection inspired Avery to write Behold the Child: American Children and their Books, 1621-1922. “It was the sight of them [your books] that originally made me want to write something about American children’s books;” [the] book owes its whole being to the Baldwin Library. Baldwin’s assistance pointed Avery to previously undiscovered children’s books from her collection. Baldwin also assisted bibliographer Marjorie Moon with her work, Benjamin Tabart’s Juvenile Library: A Bibliography of Books for Children Published, Written, Edited and Sold by Mr. Tabart, 1801-1820, another influential work for children’s literature scholars.

While these small, perhaps accidental, intersessions into preserving things made by children was an important first step in children’s literature and childhood studies, it was largely the work of women, who realized that literature for children and youth was an important aspect of cultural history. Baldwin’s collecting efforts and later institutional commitment contributed much of the academic legitimacy for the fledgling field of children’s literature. As noted by Kenneth Kidd, “By preserving children’s materials, and conferring upon them special (primarily historical but also affective) value, the archive asserts the research value of children’s literature within the broader culture of academic and university research.”