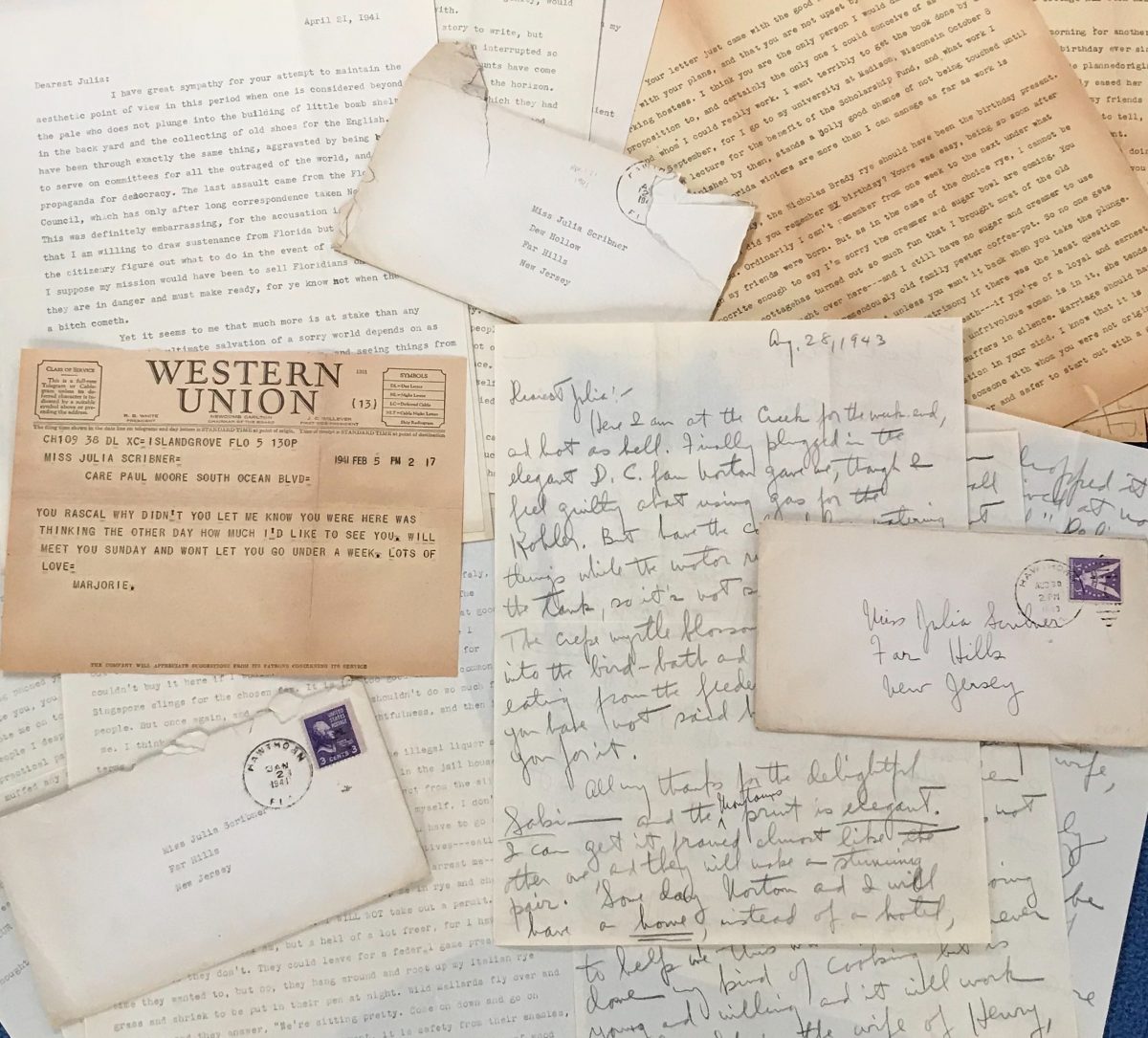 Julia Scribner (Bigham), daughter of Charles Scribner, Rawlings’s publisher, was the close friend and intimate correspondent of Rawlings from the late 1930s until the author’s death in 1953. She later served as literary executor of Rawlings’s estate until her own death in 1961.

The collection is rich in personal details of the Scribner/Rawlings relationship. In the early years, Rawlings was a mentor to Scribner. As the friendship matured, Scribner became Rawlings’s confidante and editor. Some of the letters from Rawlings are quite colorful and humorous.

On January 1, 1941, Rawlings wrote to Scribner a letter of thanks for the “forbidden liquor” in the form of Mount Vernon rye whiskey and Herring cherry brandy.  Why forbidden? The production of distilled spirits was greatly restricted at the time, since many of the distilleries had to switch their production over to industrial uses in order to support the war effort, and distribution across state lines was against the law. (Even though the U.S. would not formally enter the war until after the Pearl Harbor in December of 1941, the U.S. was assisting in the Allied effort by provisioning the fighting forces in Europe.)

No doubt, Rawlings was thrilled to acquire an alternative to her locally produced moonshine.  As for the brandy, she gushed: “I shall save it for next summer for Singapore slings for the chosen few. It is far too good for the common people.”

Apparently, Scribner had also referenced her intention of providing Rawlings with some wood ducks to raise for food.  Rawlings wrote: “Are you trying to get me put in the jail house? I HAVE NO MIGRATORY FOWL PERMIT”.  It appears that Rawlings had been trapping or harvesting mallard ducks in the wild and penning them in her yard in order to fatten them up for her dinner table. “I have been keeping that fact from the all-seeing Uncle Sam, because when I want to eat a duck I raised myself, I don’t want to have to report its demise to the Roosevelts… So if you insist on adding wood ducks to Cross Creek”, Rawlings wrote, “bring them down some time in a suitcase and YOU run the risk. The liquor is much more to the point.”

Apparently Rawlings ended up with her own breeding flock, since she bragged copiously about the delectability of her roasted mallard in 1942’s Cross Creek Cookery. In any case, this letter from 1940 gives us a glimpse of her wry sense of humor and her burgeoning pride in her culinary skills.