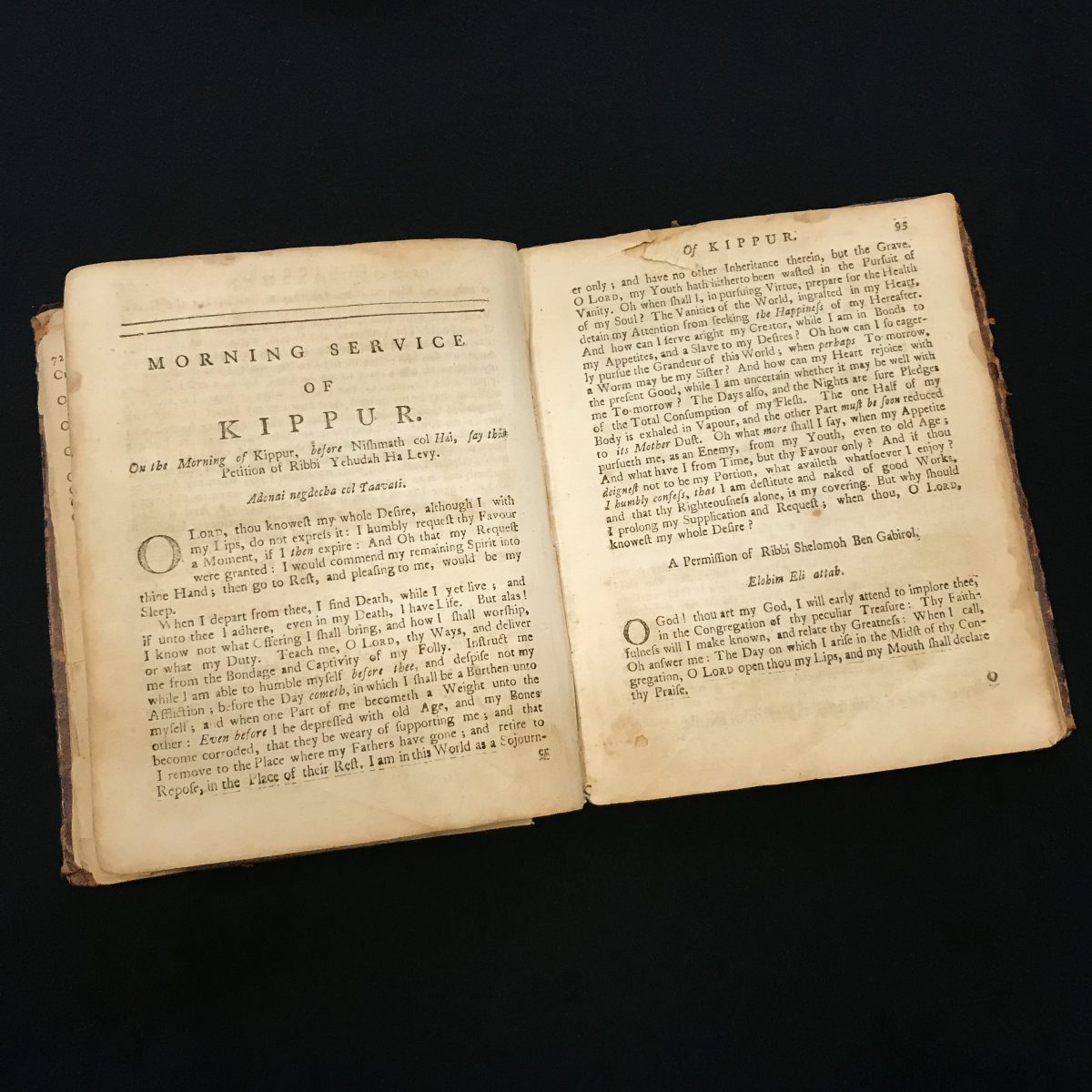 Submitted by Dr. Rebecca Jefferson, Head of the Isser and Rae Price Library of Judaica

The first English translation of a Jewish Prayer Book, the Prayers for the Jewish High Holidays, was published in 1766 by Isaac Pinto, a Jewish immigrant of Sephardi (Spanish/Portuguese) heritage. Pinto, a merchant from the British West Indies, arrived in the American Colonies at the age of 20 and became a member of Shearith Israel, the first Jewish congregation to be established in North America. The congregation had been founded in 1654 by twenty-three Jews escaping from Recife, Brazil due to the arrival of the Inquisition; other Jews who fled returned to their original homeland in Amsterdam or formed new communities in the Caribbean islands of Curacao, Jamaica, St. Thomas, and Surinam.

By the time that Pinto arrived in New York in the 1740s, the Shearith Israel synagogue in Mill Street had been around for a decade. It was the only synagogue in the city, and it served a mixed Jewish community of around 300 people, including immigrants of both Ashkenazi and Sephardi heritage, as well as those descended from the earliest Jewish arrivals. Pinto was surprised, however, to discover how many of his fellow congregants had no familiarity with the Hebrew language. Recognizing the need for a prayer-book in the vernacular, Pinto set about producing a translation. Unlike the Jewish prayer-books widely used today, Pinto’s version did not include any original Hebrew text; however, the Hebrew titles of the prayers and a few Hebrew words were provided in transliteration. An “Advertisement” on the verso of the title page explains that the printer had used italics for Hebrew letters that were otherwise difficult to render in Latin letters, and in the case of some of the proper names, he found them to be “wrote more agreably to the Hebrew orthography,” thus, for example, the name Moses is transliterated as Mosheh.

In the preface to his work, Pinto noted that “it has been necessary to translate our Prayers, in the Language of the Country wherein it hath pleased the divine Providence to appoint our Lot.” As a product of the British colonies, Pinto’s prayer-book included a prayer for King George III and the royal family of England. Yet the fact that the first Jewish prayer-book to be published in the English language took place in colonial New York with its tiny Jewish community rather than in London, which had ten times the number of Jewish residents, most likely served as some sort of declaration of independence. By being the first to use an English prayer-book in their services, the nascent American Jewish community could demonstrate to their London elders that they had the will and the ability to determine their own religious practices.

The Price Library’s copy of one of the most important printed books of Jewish Americana is sadly missing 34 pages, including its title page. The title page reveals that the work was “For [Pinto] printed by John Holt, in New York, A. M. 5526” (the Hebrew date for 1766). Holt, a major printer of the period, produced the New York Journal which provided an influential voice in support of American Independence. Isaac Pinto also engaged in the politics of the day, hailing American patriotism and condemning British taxation, and he wrote numerous articles on the subject in Holt’s newspaper. Pinto also gave his signature to the Non-Importation Act of 1770 and, thanks to his linguistic abilities, he was subsequently hired as an official translator by the United States Government in 1781. When he died in 1791, his obituary in the New York Journal noted Pinto’s standing as a linguist and scholar, as a well-loved figure in New York Jewish society, and as a staunch supporter of American liberties.