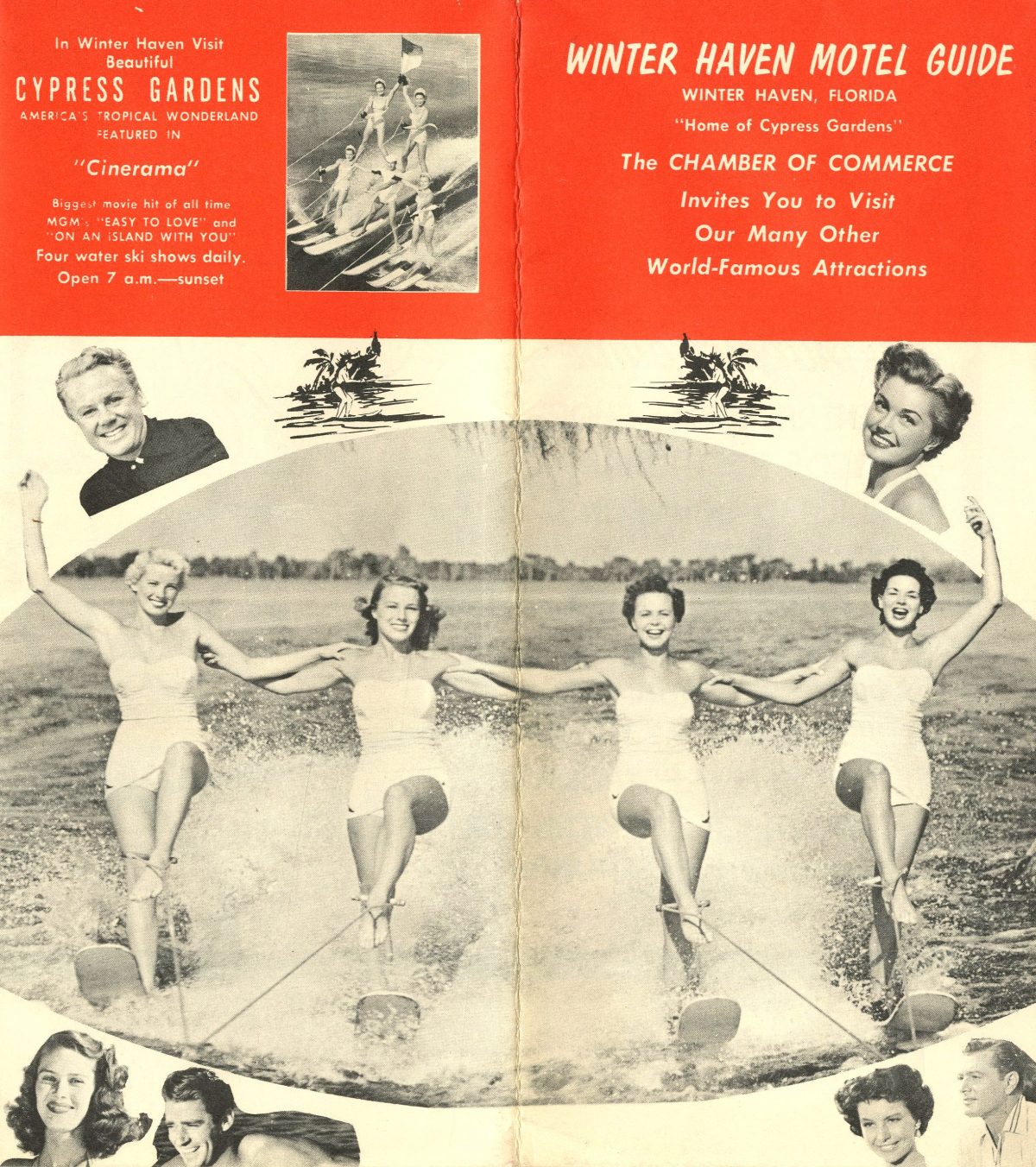 In response to the explosive success of television in the mid-20th-Century, the motion picture industry was under great pressure to lure ticket buyers out of their living rooms and back to the theaters. Beginning in 1952, Hollywood introduced a number of widescreen processes, gimmicks and novelties (CinemaScope, VistaVision, Todd-AO, 3-D, Smell-O-Vision, Percepto, Emergo, etc.) that were designed to excite and amaze the movie audience with larger than life images, sensory stimulation and stereophonic sound resulting in packed theaters around the world. The first, and most successful (if not long- lasting) widescreen process was Cinerama (“Puts You in the Picture!”).

Inventor, film pioneer and boating enthusiast, Fred “The Father of Water Skiing” Waller (credited with obtaining the first water ski patent) had been developing a three camera and three projector system that would present a more natural viewing range. Waller’s work on this system began in the 1930s and culminated with the world-premiere of THIS IS CINERAMA, an epic reserved-seat world travelogue on September 30, 1952. According to film historian Douglas Brodie: “…The Cinerama system utilized a screen greater in size than any previously employed, stretching in a wide angle arc of 146 degrees across the width of the theatre. Three motion picture projectors simultaneously shot forth separate ‘panels’ of the image which, together on screen, made up the total panoramic view…” The film was hailed as a major cultural breakthrough and a must-see event. The revolutionary Cinerama process, dazzled audiences and opened the floodgates for entertainment that was impossible to present on a small black and white television screen.

At the same time Fred Waller was busy perfecting his Cinerama process, entrepreneur Dick Pope had opened Cypress Gardens, near Winter Haven, in Florida. The attraction, billed as the “Water Ski Capital of the World” was prospering as recreational automobile travel boomed following the Second World War. It would only make sense that the “Water Ski Capital” and the “Father of Water Skiing” would combine their offerings to present Cypress Gardens and the sport of water skiing to an eager film going public (and the average tourist!) on the largest curved – screen imaginable in THIS IS CINERAMA.

Cypress Gardens had benefited, with widespread publicity, from film appearances in various short subjects through the war years and, as a scenic background setting, in the full-length films such as MOON OVER MIAMI (20 Century-Fox – 1941) starring Betty Grable and  ON AN ISLAND WITH YOU (MGM- 1948) starring Esther Williams, but in THIS IS CINERAMA, the popular tourist spot was a star attraction opening the second act (following intermission) with almost 20 minutes of technicolor footage of graceful water skiing “Acquabelles” on Lake Eloise and colorful outboard speedboats flying through the flower-covered canals (“…You enjoy every thrill at Cypress Gardens, you live every moment actively, personally…just as if you were really there , joining in the fun…”). The popular Florida destination was positioned alongside the La Scala Opera House, Niagara Falls, the canals of Venice, Edinburgh Castle, the Hoover Dam, the Grand Canyon and the Golden Gate Bridge as part of the biggest box-office sensation of 1952.

The Cinerama crew spent more than three weeks in this photogenic locale making test shots of all kinds with the Cinerama camera. It was an ideal place to experiment with such things as camera angles, close-ups and long shots, traveling shots, scene composition and the technique of establishing primary and secondary interest. Film goers, who saw THIS IS CINERAMA in 1952, fondly remember the opening Coney Island roller coaster ride, the coast-to-coast tour of the United States, the ballet at the La Scala Opera house and the natural beauty of the Sunshine State showcased at Cypress Gardens at the height of its fame and popularity. In the decades before Disney World, attractions such as Silver Springs and Cypress Gardens represented Florida tourism and to be included in a major production as significant and far-reaching as THIS IS CINERAMA confirmed the importance of Cypress Gardens as a tourist mecca. To be included in this major film event was advertising that couldn’t be purchased and could only be attributed to the Fred Waller/water skiing connection to the project. Cypress Gardens lasted well-past the arrival of Disney, but the Cinerama process proved too expensive and cumbersome to last past the early 1960s, but it did introduce the world to the large screen and stereophonic sound we expect and appreciate in the era of IMAX. With the recent DVD/Blu-ray release of THIS IS CINERAMA, audiences will, once again, be able to see Cypress Gardens and Cinerama in their prime and relive the excitement (ironically on a TV screen) of the Cinerama process that changed the shape and sound of movies in 1952. The Cinerama process provided inspiration for tourists looking for a vacation destination that would include the glories of Europe, the wonders of the western United States and the beauty of Florida’s Cypress Gardens.

All ephemeral items, pictured, are from THE JIM LIVERSIDGE COLLECTION in the Department of Special and Area Studies Collections, George A. Smathers Libraries, University of Florida, Gainesville, Florida except the Winter Haven brochure from the Florida Tourist Brochure Collection in THE FLORIDA HISTORY COLLECTION.