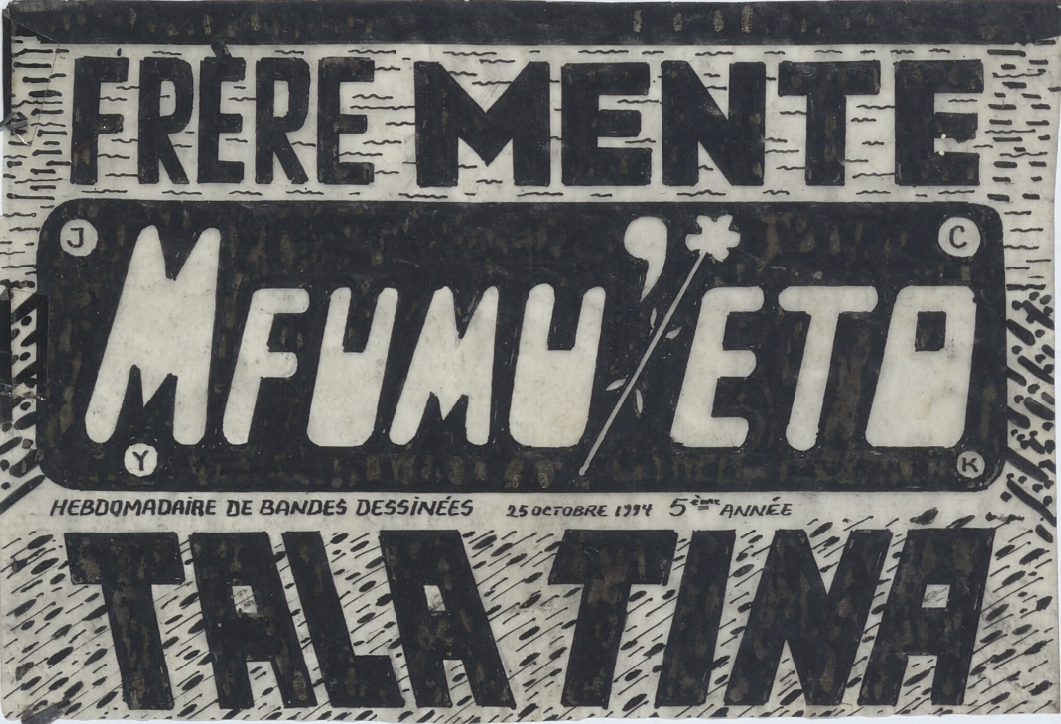 I’m thrilled to share that, in collaboration with Professor Nancy Hunt, I’ve recently accessioned the creative and production papers of comic artist Papa Mfumu’Eto 1er (he brands himself as “le premier”—the first) from the Democratic Republic of Congo. This is the only collection of an African comic artist’s original papers available in any public collection worldwide. They’re online as the Papa Mfumu’Eto 1er Papers with the physical manuscripts available for research in SASC’s Grand Reading Room (see the finding aid).

I also collect African comic creators who publish in Europe, a handful of whom such as Barly Baruti, Pat Masioni, and Marguerite Abouet are recognized in francophone countries. Relatively unknown outside Europe or Africa (very few libraries own comics created and published in Africa), they’re beautifully produced with prices reflecting such quality production. In contrast, Papa Mfumu’Eto’s comic books were sold on the street for the price of a loaf of bread. He wrote in Lingala, Kinshasa’s lingua franca, to tell stories for his neighbors that they could relate to and recognize as their own. So, while there’s nothing fancy about them, they were extremely popular and reflect a time and place only poorly understood by non-Congolese. For anyone studying 1990s Kinshasa, they’re a window into people’s lives and world views at an important moment of social and political change.

Comic books and their “franchises” are enormously popular in the US, with films and television series complementing online access and mass market print media. We see superhero, villain, and other character images often and seemingly everywhere. Beyond these everyday encounters, the Libraries (and SASC in particular) can support your “deep dive” explorations of comics’ history and cultural diversity if you choose to stray from the well-trod path of today’s commercial juggernauts. We offer access to many examples of a variety of local comics traditions, representing myriad approaches and styles that are part of a diverse, vibrant, global, and very popular art form.

Examples of comics in a variety of Smathers Libraries locations

The featured image is the masthead title figure for the weekly Mfumu’eto comic “Tala Tina,” dated October 25, 1994. A long-stemmed, cut flower signifies Princesse d’Or (Golden Princess), both a frequent character in these comics as well as the artist’s own daughter. Original ink on tracing paper.