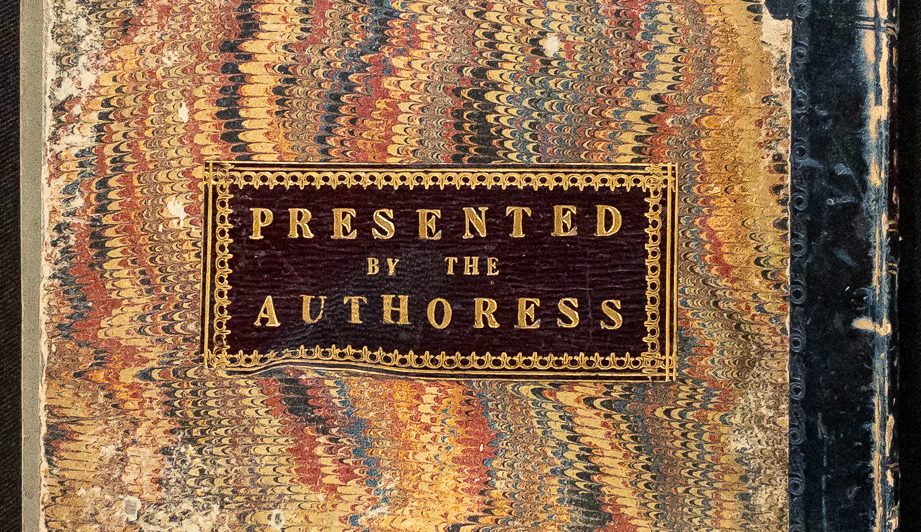 Submitted by Rebecca Jefferson, Head of the Price Library of Judaica

In mid-19th century London, a woman called Abigail Lindo quietly published a Hebrew and English dictionary. While the presentation stamp on our book’s cover, seen above, proclaims Abigail’s authorship, the title page is more subtle, emphasizing Abigail’s relation to her father: “Third Daughter of David Abarbanel Lindo.” The printer, Samuel Meldola, also notes that the book is “not published:” a convention by which a woman could modestly put forward her work. Abigail’s dictionary came out in the same year that the Bronte sisters published their first volume of poems under male pseudonyms. As Charlotte Bronte later noted: “we did not like to declare ourselves women, because – without at that time suspecting that our mode of writing and thinking was not what is called “feminine” – we had a vague impression that authoresses are liable to be looked on with prejudice …” Abigail’s book, however, was aimed at a narrower audience; an audience that would be receptive to its contents and (hopefully) more forgiving of the author’s gender. Taken together, these pieces of bibliographical evidence provide fascinating insight into the lives of scholarly women in early 19th century Britain, and yet the dictionary is so much more.

Abigail’s dictionary proves that she was a talented, and somewhat unsung, philologist who was exploring creative ways to expand classical Hebrew into everyday parlance at least four decades before Eliezer Ben-Yehuda began reviving the language, eventually earning him the title: “father of modern spoken Hebrew.” Abigail Lindo hailed from a prominent Sephardi family whose most famous member was the great philanthropist, Sir Moses Montefiore. Recognizing her singular talents, Abigail’s uncle, the scholar Moses Mocatta, tutored her in Hebrew. As a result of her lessons, she created numerous lexicographical tools, including a Hebrew and English vocabulary (printed in 1837). The vocabulary was highly regarded in the community and recommended for use in the Hebrew schools. Her dictionary, published (not published) in 1846, expanded on her previous lexicographical endeavors, with an invaluable list of Hebrew abbreviations and a guide to Hebrew roots, in order, she explained, to help students who wished to “consult the celebrated works of … other eminent Lexicographers.”

The only other known Hebrew vocabulary published by a woman was Elizabeth Smith’s A Vocabulary, Hebrew, Arabic, and Persian, which was printed posthumously by the Rev. J. F. Usko in 1814. Abigail’s dictionary went further by providing Hebrew equivalents for modern English terms. Thus, she provided Hebrew words for female accoutrements, such as frocks, petticoats, pocket-handkerchiefs, and parasols, as well as Hebrew terms for modern inventions like the telescope and barometer. In some cases, she used the Hebrew root letters to generate a word by careful analysis of its meaning. Thus, to provide a Hebrew term for the English word phlegm, she used lakhut, which she derived from the Hebrew word for humidity or moisture (the modern Hebrew term is lekha). Other Hebrew-English dictionaries of the day, however, still relied on the classical Hebrew word rok, meaning spittle.

Women lexicographers are documented as early as the 17th century. Most endeavored to record original English dialects and terms vital to domestic life. It was only in the early 19th century that they began to publish foreign language dictionaries. Abigail was only the seventh woman to compile a dictionary translating between English and another language, and she was the first to deal solely with the Hebrew language. Sadly, she did not live to realize her full potential. At the age of 45, she died from complications arising from tumors in her uterus.

The Price Library’s copy of Abigail’s wonderful dictionary was purchased by Ellice Berg in memory of her father, Samuel Price.

Click the link below to view the volume in our library catalog.